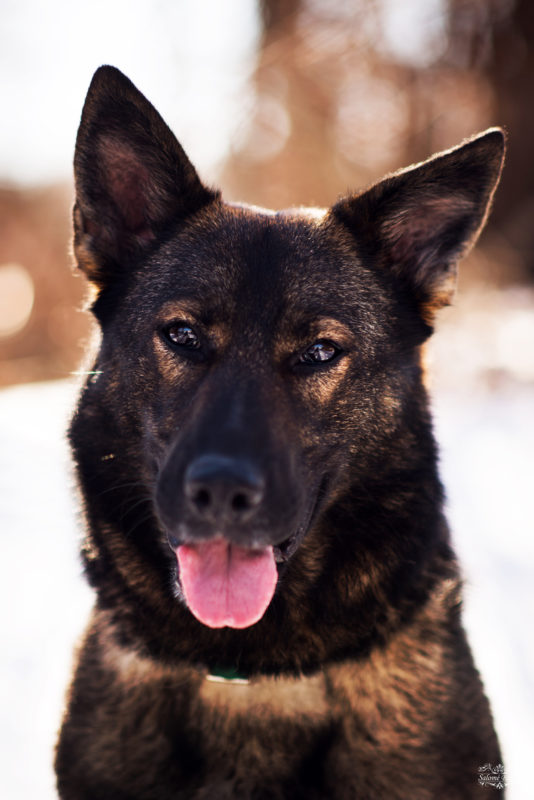 She was named based on what we knew about her. Twisty twisted, which is to say she spun in frantic circles in her kennel. Relentlessly, manically. Twisty defecated in her kennel and spun around in it. Twisty was not in good shape. Twisty was in trouble.

But she was not alone. Staff, volunteers and, eventually, a foster family changed her narrative.

Consider: when Twisty first entered a home, that of an experienced staffer, it took her a good 30 minutes to settle down. Then it came. A feeling of calm, of belonging. She was affectionate and sought attention. But her first several nights in a crate brought nothing but howls. Then, when allowed to sleep on a dog bed in the room with the staffer, she was relaxed and slept through the night — in the room, despite having an open door and access to the rest of the house.

For the last many months, Twisty has shown even more progress in the safe comfort of a foster home. We know so much more about her now. Her foster mother knows more. Now, she is called Heidi. It’s a real name. And she is becoming a real dog, the dog she was meant to be.

She is energetic and curious. She loves playing in the yard and running like the wind. She coexists peacefully with two cats in her foster home and thinks nothing of it when the younger cat joins her in her kennel.

Heidi still has work to do, but she now has the proper environment in which to do it. Her kennel remains her safe space, but she often emerges from it to get some affection and reassurance. She’s still uncertain when people visit. For the first two months there, Heidi didn’t make a sound. Now she barks, appropriately, if someone approaches the house. She’s afraid of stairs and has yet to use them. But she loves car rides. She isn’t quite sure yet what to do with dog toys, but she adoringly brings them into her kennel for safekeeping.

In short, it’s been a long and meaningful journey for this proud animal.

“Twisty” has shed her name and is slowly shedding her fears. Tears once shed at her sorry state are now tears of joy at her newfound happiness. Welcome to the world, Heidi.

Heidi is one of the rescued 36 German Shepherds that have been in held in protective custody at the  New Hampshire SPCA for over a year while their owner appeals a conviction of animal cruelty and neglect.  A trial is scheduled for superior court in early April, 2019.

Foster parents are an invaluable part of the care and rehabilitation of young, sick, or special needs animals. Fosters must be 18 years or older, be willing and able to take your fosters to follow-up veterinary appointments every 2-3 weeks, keep your foster pets separate from household pets for two weeks or longer in a spare room or contained area.