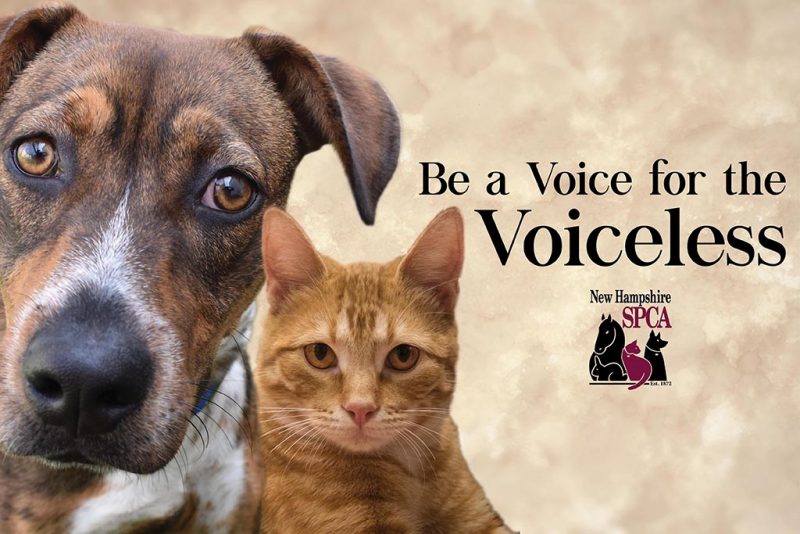 Sign up for action alerts and updates to stay informed!

Championed by Senator Jeb Bradley (R-Wolfeboro) and Representative Katherine Rogers (D-Concord), collectively these laws help address the enormous costs to care for animals who are rescued from neglect, prevent someone convicted of felony cruelty from owning or living with an animal for a minimum of five years, and ban the paraphernalia used in animal fighting. We are grateful to Governor Sununu, these legislative leaders, animal shelters, law enforcement, and countless advocates for their commitment to preventing the suffering of animals in the Granite State.

“I would like to thank the advocates at the Humane Society of the United States, Senator Jeb Bradley, and Representative Katherine Rogers for their hard work, advocacy, and leadership in getting these two bills done,” said Governor Chris Sununu. “Together, these two bills build upon the progress made last term in strengthening animal cruelty laws in New Hampshire by reducing costs associated with animal cruelty cases, preventing animal suffering, and protecting animals from cruelty.” 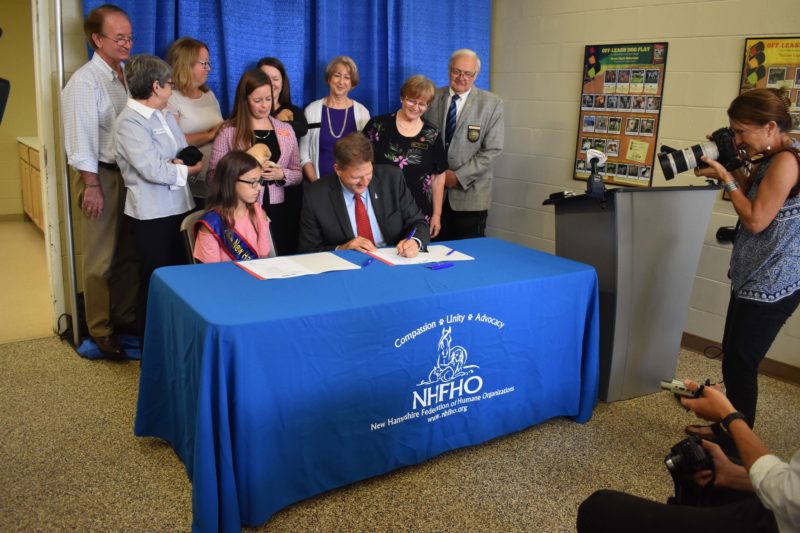 This week there was yet another large-scale rescue of dogs from an unlicensed breeder in NH!  This case involves over 100 dogs and puppies.  Our friends at Pope Memorial SPCA of Concord-Merrimack County and the Humane Society of Greater Nashua are currently caring for these dogs until they can be placed into loving homes.  Similar cases in recent years have resulted in over $3 million in animal care costs to nonprofit animal organizations and New Hampshire towns and the suffering of hundreds of dogs. This case is a stark reminder of why New Hampshire’s weak laws regulating breeders need to be updated for the health and safety of animals and the public. Our animals, towns, and taxpayers can’t afford New Hampshire’s current breeder laws.

Members of the NH House and Senate Finance Committees are considering a budget amendment that requires all pet vending entities that transfer over 25 animals per year be held to the same reasonable standards of animal care – and they need to hear from you! Please send an email urging them to keep an enforceable “pet vendor” definition in the budget. Please take action by Monday, June 17th. Thank you for your advocacy!

Body: Keep it simple and, if you have been impacted by a recent animal cruelty case, share your story. Legislators need to understand why we desperately need to increase oversight of breeders.

On Thursday, May 9th, the NH House of Representatives will vote on Senate Bill 77, a bill that would create a preliminary hearing after animals are rescued from cruelty to urge a speedy trial, helping to ensure animals do not need to wait months or years for a cruelty case to be completed before finding loving homes.

Senate Bill 77, sponsored by Senator Jeb Bradley (R-Wolfeboro), has broad bipartisan support and passed the NH Senate unanimously in February.Unfortunately, while it passed the House Environment & Agriculture Committee last week, it has been altered to include a provision that prevents the Department of Agriculture from inspecting all but eight dog breeders in the state – a provision we cannot support considering the most expensive cruelty cases over the past two years have involved six unlicensed dog breeders and impacted hundreds of dogs.

Please call, and then email, each of your state Representative(s) by Wednesday and urge them to vote down the committee amendment and pass the Rogers-Marsh floor amendment, which would maintain the strong policies in Senate Bill 77 while removing the exemption for commercial dog breeders.

ACTION STEPS:
The Senate Bill 77 floor amendment will have strong opposition and the animals need your voice!
1. Look up your state Representative(s). You may have one or up to 11 Representatives, and it’s important to contact each one. Calls are better and have more impact than emails. Remember, you are contacting legislators on their home or cell phones, so please only call between 9:00 am and 7:00 pm.
2. Introduce yourself and state the purpose of your call. “My name is X from X (town), NH and I’m calling to urge you to vote down the committee amendment and pass the Rogers-Marsh floor amendment to Senate Bill 77 on Thursday.”
3. Explain the issue and repeat the purpose of your call. “This bill, sponsored by Senator Jeb Bradley (R-Wolfeboro), would help ensure animal cruelty trials are completed as quickly as possible so taxpayers and nonprofit animal organizations are not left with hundreds of thousands of dollars in costs and animals are not forced to wait a year or more to find loving homes. This bill would also ban someone convicted of purposeful animal torture from owning an animal for a minimum of five years. This bill is the result of many years of discussions and it passed unanimously in the Senate. The House Environment & Agriculture Committee voted in favor of the bill after additional amendments were made.
The committee amendment maintains New Hampshire’s current law which only requires a commercial dog breeder to be licensed and inspected by the Department of Agriculture if he/she transfers 10 litters/50 puppies a year – a threshold that is both much higher than our neighboring states and unenforceable. That is why a floor amendment will be introduced on Thursday to remove the existing definition of a commercial breeder.
Over the past two years, New Hampshire has seen six large-scale animal cruelty cases involving unlicensed breeders, costing nonprofit animal shelters and taxpayers millions of dollars to care for the animals for the months and years it has taken for the cases to be decided by the Courts. It is critical that Senate Bill 77 be signed into law to address the costs to care for animals rescued by law enforcement from cruelty and not to become a vehicle to maintain a carve-out for commercial breeders. On Thursday, please vote down the committee amendment and pass the Rogers-Marsh floor amendment to Senate Bill 77. Thank you for your time and consideration.”
PLEASE CALL before Thursday!
AFTER CALLING PLEASE EMAIL YOUR STATE REPRESENTATIVE
Email Addresses:
Look up your state Representative(s) here.
Subject Line: Senate Bill 77 – NH Citizen Supports the Rogers-Marsh Floor Amendment
Greeting: Dear Representative X
Body: Request that your legislator(s) vote down the committee amendment and vote for the Rogers-Marsh floor amendment. State the reasons you believe New Hampshire needs stronger laws regulating commercial dog breeders.
Closing: Be sure to list your name and town so they know you’re a NH citizen

Thank you for your continued advocacy!

Senate Bill 77 continues to move through the legislative process. On Tuesday, the House Environment & Agriculture Committee will vote on this important bill. The bill, sponsored by Senator Jeb Bradley (R-Wolfeboro), would help ensure animal cruelty trials are completed as quickly as possible so taxpayers and nonprofit animal organizations are not left with hundreds of thousands of costs and animals are not forced to wait a year or more to find loving homes.

While the New Hampshire SPCA supports SB 77, the committee has introduced an amendment that has both positive and negative impacts on New Hampshire’s animals. We support a provision that would create a state fund to offset the costs to care for animals who have been rescued from cruelty. However, we oppose two provisions in the amendment:

1) the first would maintain the existing definition of a commercial dog breeder at 10 litters/50 puppies per year, a threshold that is both much higher than our surrounding states and unenforceable.

2) language that weakens an existing law by not requiring forfeiture of the animals if a post-conviction bond is not paid.

Over the past two and a half years, there have been six large-scale animal cruelty cases involving unlicensed breeders. We strongly believe that these cases could have been mitigated if New Hampshire’s definition of a commercial dog breeder was in line with other states. We need to create a fair regulatory process in which animal shelters, rescue organizations (including home-based rescues), pet stores, and breeders are held to the same animal care standards if they transfer 20 or more animals in a year, ensuring appropriate oversight of animal care and disease prevention.

EMAIL COMMITTEE NOW
Subject Line: NH Citizen Supports SB 77 & Opposes the Commercial Breeder Definition
Greeting: Dear Madam Chair Gourgue & Members of the Committee
Body: State your reasons for supporting SB 77 and opposing the commercial breeder definition.
Closing: Be sure to list your name and town so they know you’re a NH citizen!
Thank you for your advocacy!

Is being heard by House Environment and Agriculture Committee.

Public Hearing has been scheduled for Wednesday, April 17 at 10am at the State House in Concord, NH.

CALL, EMAIL, WRITE AND MAIL A LETTER  to the Committee Members and ask them to pass SB77 as is without any amendments prior to hearing on Wednesday, April 17.

House and Environment and Agriculture Committee Members are listed here

You can also send an email that will reach ALL Environment and Agriculture Committee members at:

ATTEND PUBLIC HEARING: You can…

2)Submit written testimony to the committee

3)Testify verbally ( note: if you plan to speak, you are limited to three minutes and should bring 20 printed copies of your comment for the committee.)

If you are not testifying, you do not need to stay for the duration, you can simply stop by and sign in. Please plan to arrive by 9:30am or earlier if you intend to stay for the entire hearing. If you are planning on speaking, please note that you may be waiting a few hours to do so.

UPDATE: March 7
Senate Bills 77 & 161 have passed the NH Senate with full bipartisan support! This is a crucial step forward in our work to protect dogs in unlicensed breeding facilities and to address the enormous costs to care for animals rescued by law enforcement from cruelty.

Next step: both bills will move to the House of Representatives where they will receive a public hearing in the coming weeks.

Sign up for action alerts to stay informed on when and how to contact legislators to urge their support.

Please take a moment to thank your Senator for her/his support if they voted in favor of these anti-cruelty measures. Thank you for your advocacy!

Over the past two and a half years, there have been six large scale animal cruelty cases involving unlicensed breeders and dozens of other cases in which animals were neglected in NH. New Hampshire has the weakest commercial breeder regulations in the Northeast but you can help change that.

Support Senate Bill 161: Clarifies the Definition of a Pet Vendor to Ensure Basic Standards of Care

Under current NH law, a “pet vendor” is an animal shelter, rescue organization, pet store or commercial breeder which is required to be licensed and inspected by the Department of Agriculture. This bill creates an enforceable and equitable definition across all entities by defining a pet vendor as any entity that transfers 20 or more animals in a year. Over the past two and a half years, there have been six large scale animal cruelty cases involving  unlicensed breeders in the state. Costs to care for the animals from these cases has exceeded $3 million.

Both bills will go a long way to preventing the horrific cruelty we’ve seen in the Granite State. We hope that we can count on you to raise your voice for the animals at the State House this year.  Contact your legislators and urge support of these bills.

Sign up for action alerts and updates to stay informed!