Resilience is the ability to bounce back from a difficult life experience. Dom the Donkey is the definition of resilience.

Dom was rescued in June of 2021 with two emaciated mares, River and Kansas. Personally, not having much hands-on donkey experience, I prepared for the worst: stubborn, and difficult to work around. I have never been so wrong. Dom let us take care of him easily.

He trusted us even after being betrayed, so severely, by those who were supposed to care.

Incredibly, so many animals can continue to be loving after experiencing neglect in its rawest form. Dom and his herd experienced horrific neglect. Lack of food for months, mud and manure covering legs and bodies, unattended medical needs or routine care, and hooves so neglected and overgrown it was causing leg deformities and made walking incredibly painful.

Yet, after all this, the herd of three was willing to walk onto a scary trailer in the pouring rain with strange humans standing all around and travel quietly to an unfamiliar barn and behave with such trust. The scene speaks volumes for one little Donkey named Dom and his herd.

Dom’s extremely overgrown hooves had been so neglected that he was having obvious pain and difficulty just walking. His hoofs looked like Aladdin’s Slippers when we rescued him. Because he was in pain, Dom laid down much more than his herd mates, causing his long coat to become matted covering his entire belly and parts of his legs.

It was a painful transformation back to relative normalcy, but through it all Dom maintained his loving demeanor. He immediately started to put his head on the shoulder of any human who would allow it. (It became his signature move.) He just wanted to hug everyone. Initially, the staff was a bit skeptical of these hugs, but quickly embraced the beautiful outward display of appreciation from an animal.

Dom LOVED to be loved, even after the people who were supposed to take care of him had failed him. He was a favorite with ALL the summer campers and staff alike. The campers were lucky enough to spend time grooming and walking him during almost every session throughout the summer.

Once Dom was vaccinated and microchipped, clipped, hooves trimmed, dental done, and management for his Cushing’s disease had begun, it was time to find him his forever home. Dom deserved a place where he would never ever have to worry about being neglected again.

We knew with his charming, snuggly personality, he would have many amazing offers for homes. We, of course, wanted that perfect match.

The perfect match came in the form of an email from his now forever mom, Betty. The email I received described their love and heartbreak over their late donkey. They had experience managing Cushing’s previously and had a perfect paddock to keep him.

Betty sent a picture of her and her husband, Jarrod, with their late donkey. All I can say is “goosebumps”.

I knew they needed to meet Dom. I warned them if they met him, they would love him… and I was right. THEY DID!

References and barn checks were completed and all that was left was to send him to his forever home. Dom’s new parents agreed to let him stay through the last week of camp so that no campers missed out on experiencing our sweet donkey. Then he went home. Home to his perfect little forever herd and family.

Dom has equine herd mates, goat neighbors, a dog brother, a Mom and a Dad, and grandparents who adore him. He is one lucky donkey, and we are better for having been able to care for him when he needed us most.

We could all learn a little from Dom’s story. Live for what today has to offer, not for what yesterday has taken away. 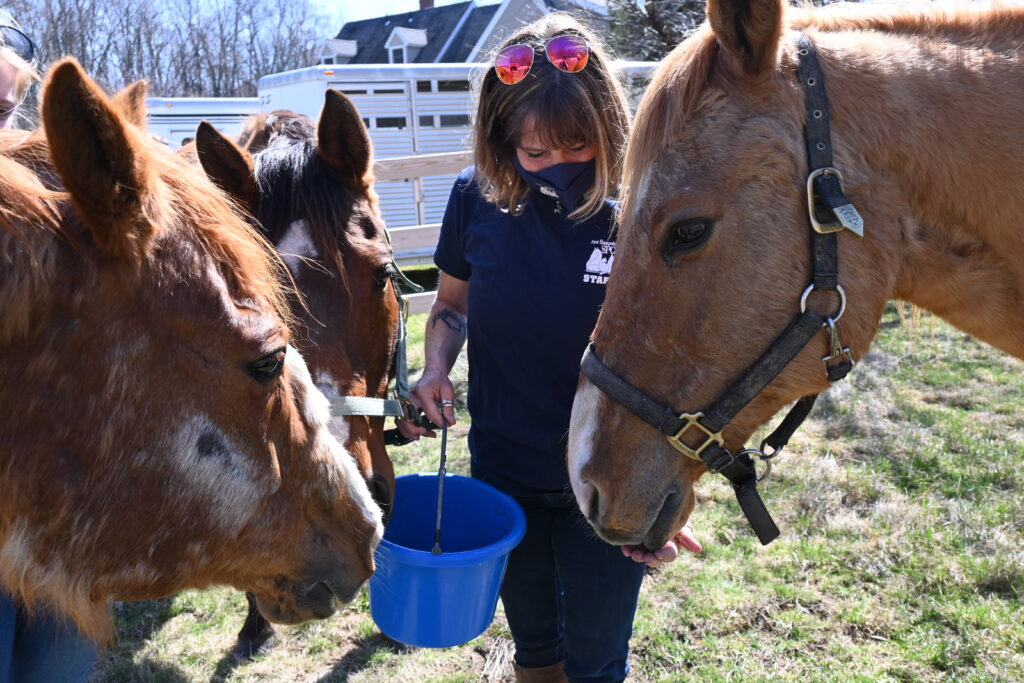 Adopt a Horse or Farm Animal!

The New Hampshire SPCA is one of the few animal shelters in the state equipped to provide care and adoption for homeless, abused or neglected farm animals. Our farmyard friends available for adoption include horses, ponies, pigs, goats, sheep, fowl, and occasionally other barnyard animals.