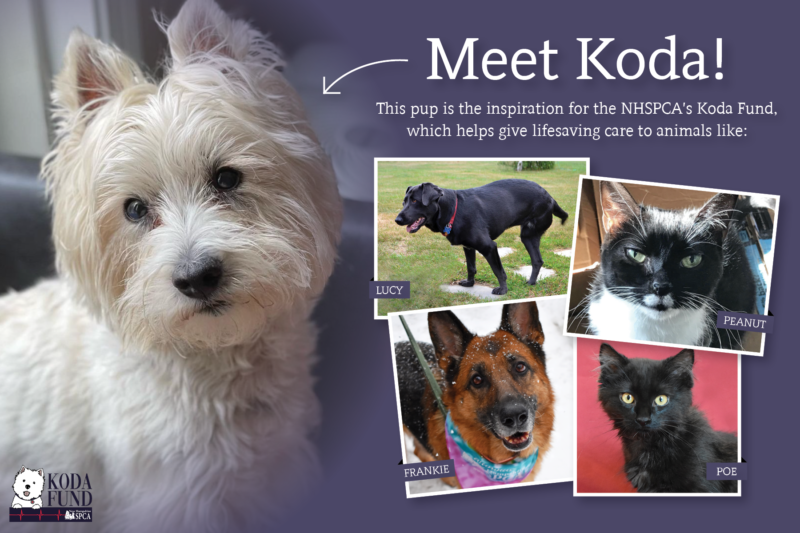 Would you ever think that one pet can save the lives of so many others? It’s true. That’s the story of Koda, an adorable 15-year-old dog who has helped the New Hampshire SPCA give second chances to critically ill and injured homeless animals.

It all started in 2012, when Koda’s owner, world-famous psychic medium and friend of the NHSPCA John Holland, created the Koda Fund in his honor. Through the Koda Fund, Koda has helped raise critical money for lifesaving medical procedures that might otherwise be beyond our ability to provide.

Just a few months ago, we met a wee little kitty named Peanut, who was rescued from an NYC construction site. After being transferred to the NHSPCA, it was clear that Peanut was gravely ill, suffering from a severe respiratory infection. Who knows what would have become of her had it not been for the generosity and support of John, Koda, and people like you. Peanut received emergency medical care and made a full recovery, all thanks to the Koda Fund. She was soon adopted and now lives in a loving home.

Over the years, the Koda Fund has saved the lives of so many pets in critical need, like Lucy, the playful three-legged pup who tore the ACL in her remaining hind leg, and Poe the abandoned kitten born with two heart defects. They both received vital surgeries and went on to be adopted by their forever families. We will never forget Frankie, a loyal German Shepherd who had experienced unspeakable horrors in her lifetime. Poor Frankie was rescued, along with 35 other dogs, from severe neglect at the hands of a breeder and spent nearly two years at the NHSPCA while the court trial dragged on. One morning, it was clear that something was terribly wrong. Frankie was suffering from bloat, a sudden and potentially fatal gastro-intestinal condition. Because of the Koda Fund, Frankie received emergency surgery that saved her life. She eventually got her long-awaited happy ending, a family of her own.

Koda isn’t the only one who can help save lives. YOU can make a huge difference too. Your gift to the Koda Fund will allow the NHSPCA to continue providing lifesaving surgeries, emergency medical treatment, and a second chance to homeless animals in the most severe need. Please donate today.