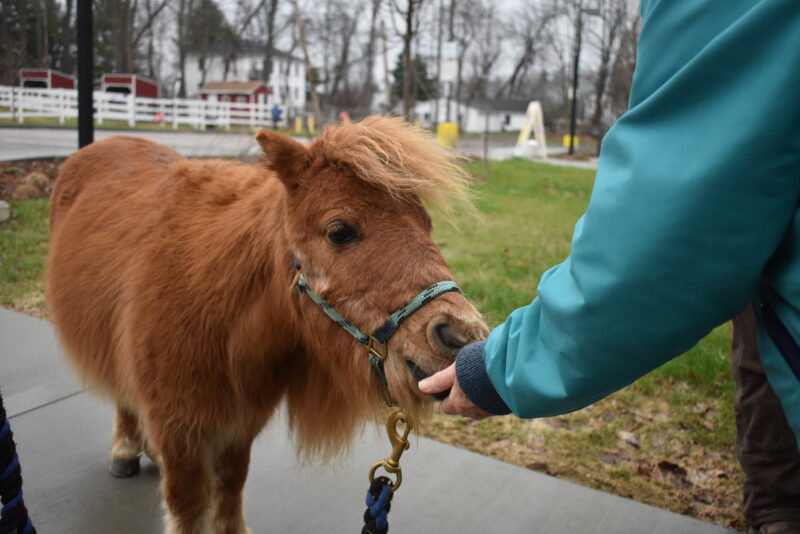 A colleague reached out to me this past Fall and asked if I would consider bringing one of my horses to an assisted living facility to visit with the residents. I knew immediately which horse I would bring: Mr. Pickles.

Pickles was adopted by my family in April 2021, shortly after his rescue by the NHSPCA. I knew he would be perfect for this job as he had come so far from being that terrified mini in a herd of six equines. Pickles was the smallest of the herd, a chestnut miniature gelding standing all of 32 inches tall. His coat was matted, and his mane tangled and wild, his halter far too small and far too tight, leaving him with permanent damage to his tiny face.

The rescue team was told we would struggle to catch this miniature horse. He was left unexamined by the vet previously because he wouldn’t be caught.

We arrived prepared. By prepared, I mean bearing peppermint candies individually wrapped to make the crinkling noise, irresistible to most horses. Even a miniature horse, unhandled and potentially abused, couldn’t resist the sound of a crinkling candy wrapper and the promise of a brighter future.

Pickles was rescued along with his herd and was terrified of human contact. Miraculously, it didn’t take long for this tiny horse to learn how to trust and accept humans once again. He now happily trots up to anyone, seeking treats and affection.

It was September when Pickles and I headed over to our visit. The residents were waiting in the parking lot, some seated in their wheelchairs and others standing with walkers, anticipating the special arrival.

Many of the residents have dementia, including the resident we were there to specifically visit. She had a fondness for horses, raising and breeding them in her past. She had become nonverbal and withdrawn for the past several weeks. We wanted to see if Pickles could work some of his magic.

We spent some time visiting with each resident and they graciously fed Pickles lots of baby carrots. Some of the residents would call him back to where they were sitting for more pats and love. His charm was infectious.

The woman we were called to visit grabbed ahold of Pickles’ halter during her time with him and began speaking horse lingo. The smile on her face while visiting with this tiny horse brought tears to my eyes. Although her words were jumbled, Pickles had obviously sparked memories from her past. It was priceless. After our visit, I was told by staff that this woman who had been so withdrawn looked into her caretaker’s eyes and said, “Thank you.”

Pickles also got to ride the elevator that day to bring a smile to a family member of a resident. Her husband lay in his hospice bed and Pickles’ presence was enough to bring her a moment of happiness during a time filled with grief.

Horses are not concerned with diagnosis, titles, or roles. I have had the privilege to witness horses impact humans in profound ways. I am forever grateful to be part of these emotional moments and to be Pickles’ Mom.

Winston Churchill once said, “There is something about the outside of a horse that is good for the inside of a man.”