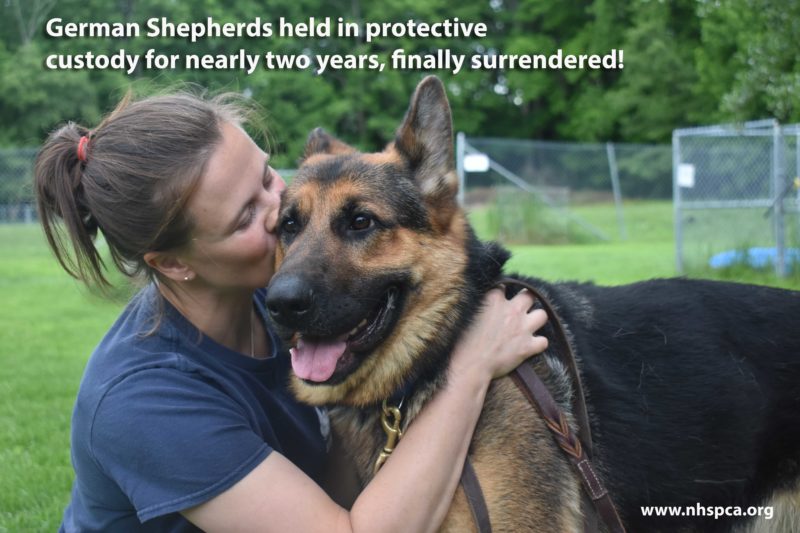 On Wednesday, October 2, 2019, the New Hampshire SPCA received a signed surrender form finally releasing 28 German Shepherds from Protective Custody and giving them a chance to find loving forever homes.   The Shepherds have been held at the New Hampshire SPCA for 22 months awaiting the trial, and then the retrial of their owner on cruelty charges.

“This is the day that we have been waiting on for far too long,” said Lisa Dennison, Executive Director of the New Hampshire SPCA.  “We took some of these dogs into custody in December of 2017 and the rest on January 2, 2018.  The system has failed them at every turn, but today we can finally celebrate that they are ours and soon they will be able to be adopted into loving, forever homes. And finally, we will be able to breathe again.”

The case of the German Shepherds has been extraordinary.  In the more than 638 days, nearly 2 years, that we have been holding the Shepherds in protective custody, they have been limbo.  They couldn’t be adopted, or even spayed or neutered.  We walked them almost constantly just to keep them from going stir crazy in their kennels.  We have fed, cared for, cleaned-up after, and kept them healthy.  . Their care has taken a toll on our staff and volunteers. But the hardest part has been not knowing when, or if, they would ever be able to be adopted.

Today, former owner, Jennifer Choate, has finally surrendered Nori, Marie, Frankie, Freddie, Dora and 23 more Shepherds. In the plea, which is scheduled to be heard in court on October 11, she will plead guilty to only 2 counts of animal cruelty.  She will not be able to breed dogs for five years in the State of New Hampshire.  She will also not be required to pay over $600,000 in restitution that the New Hampshire SPCA would have been owed.  “As part of a plea agreement,” said Ms. Dennison, “we have agreed to waive all restitution.  We know by experience that typically a very small percentage of restitution is ever actually paid. Getting the dogs released was our highest priority.”

“It was a difficult decision to agree to waiving restitution.  This case has cost our agency a great deal,” said Attorney Josh Scott, President of the NHSPCA Board of Directors.  “But our board agreed that, as always, the most important thing is the animals, not the money. Under the circumstances I think this is a great result.”

The New Hampshire SPCA will now begin the process of getting the dogs ready for adoption.  We will first require the dogs to be spayed or neutered which will take time.  We have already begun assessing the hundreds of adoption applications that have been received. The volunteers that have helped to care for the Shepherds will have first opportunity to adopt them. Then we will begin the long process of matching the characteristics of the dogs with potential adopters.   If all goes well, by Thanksgiving these dogs will be home for the holiday.

There are still weeks, if not months ahead as we find the perfect placement for each dog.  In the meantime, the expenses will continue to deplete our SOS Emergency Fund.  The SOS Fund was established to help with the cost of rescuing animals and has been hemorrhaging money for nearly two years now.  Our community has been supportive and generous through this process, but we need to rebuild our SOS Fund to be able to continue to care for these dogs and prepare for other animals that may need us.

If you would like to help with the cost of care and to help insure their recovery, please make a tax-deductible contribution to the SOS FUND by going to  www.nhspca.org.  A direct link to the SOS Fund can be found here 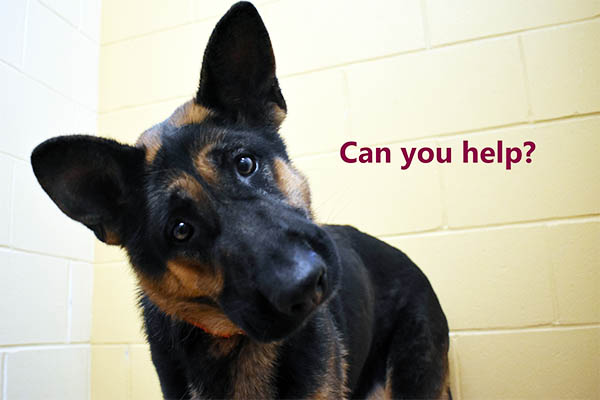